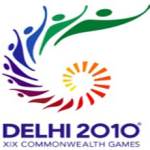 After being OD-ed by the filth, lies, corruption and the inhuman treatment of Delhi’s poor during the run-up to the Commonwealth Games 2010, I sat down to watch the opening ceremony, waiting for a miracle. It happened  – and exactly for the reasons you would have guessed. Together, India’s music, its art, original artists and artisans have nothing comparable anywhere you’ve been. India’s might is in her soft power.

This is what I saw in the spectacular show. Bullet-pointing it is the only way I can keep out the hyperbole.

[1] In shape, variety and sounds, Indian drums have no parallels. Appropriately, the Nagada drummers beat the opening rhythms to start the extravaganza. The Rhythms of India segment had the Pung Cholum from Manipur, the Chenda from Kerala and the Gaja Dhol, Wangala, Dholu Kunitha and the Bhangra. They beat in unison, the resonance of each standing out while blending perfectly with the other sounds. That’s when you felt your heart filling and the gooseflesh jumping.

[2] Among the hundreds of swirling drummers sat seven-year-old Keshav, a prodigy from Puducherry, playing 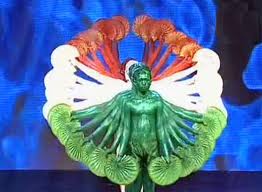 the tabla like a maestro. He didn’t miss a beat!

[3] The earliest jaw-dropper was the helium-filled aerostat balloon, the centre piece acting like a giant round television screen. As “snake charmers” played their flutes, it rose, hoisting India’s touch with technology. Through the evening the aerostat floated, reflecting the colours and pictures of the programmes. Words from 18 different languages of India appeared on its surface, all translating to ‘Welcome’. Simply marvellous!

[4] What does one say about the Indian kids’ virtuosity on stage? Hundreds of Delhi school children piled in, swayed to Hariharan’s mellifluous “Swagatham”, changed formations smoothly, switched costumes, and in a mind-boggling sequence, painted mehendi on a cloth held above their heads. As they painted from below, magically the ‘namaste’ gesture appeared on the surface facing the audience. Where can one see something like this?

[5] The yoga sequence was a master-stroke. As hundreds of yogis in their smooth golden costumes performed asanas to soothing music, a shining wire-yogi sitting at Padmasana rose out of the middle of the homakundam-like stage. As explanation flowed in Hindi and English, the kundalini appeared inside the wire-figure as a hologram. It was a spectacle meant to pooh-pooh the sinister propaganda that yoga has nothing to do with Hinduism or India. Ha!

[6] Our classical dances – Kathak, Bharathnatyam, Kuchipudi, Mohiniattam, Manipur had their own striking segment. This is when you realised that experts in the classical arts have been entrusted with the job of putting the show together. The music, the mudras, the formations and of course the costumes were simply out of the world. Colourful, but elegantly so!

[7] And the segment which had even those watching the show on TV stand up, laugh, scream and applaud: The 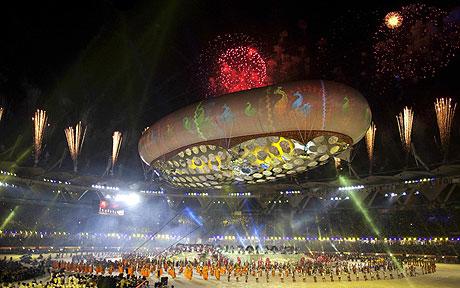 Indian train. Our trains symbolise so many things – the British legacy, the aam admi’s life, the railways’ reach to the remotest parts of India. As the bogies rolled across the stadium each carrying its unique merchandise in exaggerated sizes and colours, you saw the India that you grew up in – the India of the masala chaiwala, the banglewala, balloonwala, roadside mithaiwala, highway chandelierwala, street rope-walkers. And scurrying to catch the train were the dubbawalas, the potted women, the coolies and others. In that chook-chook gadi, the true, honest, un-hypocritical India, the endearing India that you see in the hinterland was unveiled. Just think. This is how the ordinary, but extra-ordinarily resilient Indian lives his life. It’s a scene that cannot be replicated anywhere else!

[8] It was a day after Gandhiji’s birth anniversary – and isn’t Gandhi the pillar of our British legacy?  This is how the event organisers saw it. Around a brightly lit table on the stage stood painting artists, and “drew” the picture of the Dandi march in a few minutes by simply removing fine mud from the surface. As their thumbs worked creating white areas on the mud-filled surface, Gandhi, a woman carrying the national flag and followers miraculously appeared. In the background you heard “Vaishnava Janato” played live. There was stunned silence as history unfolded. The spectators had no energy left to suitably applaud this wonder.

[9] AR Rahman’s song was billed to be the last – his CWG signature tune had come into a lot of criticism from our classical dancers who had to accompany the beat. “Too slow, too uneven”, they had complained. He was asked to tweak it. Now he walked in followed by city dancers – women in dervish-like costumes and men wearing gloves in India colours. The dance began, Rahman began singing “Jiyo, Utho, Badho, Jeeto” and all waz well, almost. Our folk dancers bravely caught the rhythm and swayed, the drummers kept time. The hesitation vanished and the stadium pulsated with dance when Rahman switched to Jaiho and took it to its crescendo. That was a clever move. 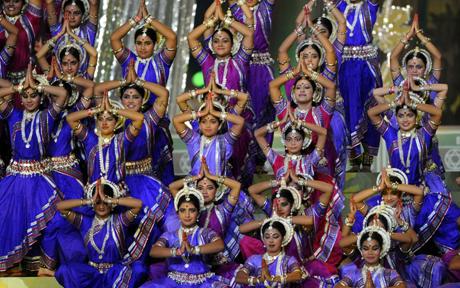 seats. They were on cue, participating in the show, clapping encouragement. In a wonderful gesture, they cheered, very loudly, the Pakistan contingent. It was a moment that made us world class. We proved we are civilised in a way that only an old culture can bequeath. Well, they booed Kalmadi as he spoke, but that’s discussion for another day.

Summary: Finally, the cameras had something beautiful about the CWG to capture. The most remarkable part of the opening ceremony was that only one complete dress rehearsal had been held at the Jawaharlal Nehru Stadium. For those who count the paisa: The ceremony cost 150 crores – an example that India now speaks in crores.

India’s clout went far in silencing a lot of criticism about the “unlivable” Games village and the apparent racism in allotting rooms, but it didn’t go far enough to acquire the privilege of declaring the games open. Prince Charles held on to the tradition by making the declaration at the end of his reading of the Queen’s speech. In a sort of compromise, the Republican lady shouted a “Let the Games begin!” with a flourish.

The show wasn’t about technology. It wasn’t perfect either. Among the 7000 artists there were a couple without costumes, the movements were a bit chaotic at times, but that just made it all so warm and endearing “unlike the show in Beijing that was so perfectly plastic,” as someone put it. This show was about who we are, what we should be proud of. In putting together a my-own kind of desi event that included a humourous take on our unique aspects of life, we definitely proved something. We Indians are not ashamed of our past. We get along, in our own inscrutable ways. We find our joys in spite of our politicians. That is a true show of maturity.

It is encouraging that the powers woke up to the fact that India’s cultural icons, and not some stiff-necked babus who must be given the task of choosing and organising the events for the ceremony.  India had arrived long ago. It’s the world that wore blinkers.

Will the Games bring us more biz contracts? Quite possible, and I hope it is in our garment designing and handicrafts, not in hard manufacture that strips the poor of land and water.
Will the Games give us a cocky gait? May be. A new accent in our speech? Quite likely.
But I’m living in the euphoria of our ancient cultural artistry. Let the feeling last!