I saw Dum Maaro Dum at my local Cineplex last night and, for a change, the Hindi film felt right at home among the early summer releases that the Friday night crowds had thronged to.

Slick, glamorous, and frenetically paced, DMD has all the hallmarks of a summer blockbuster – a terrific plot, great music, and the non-stop action that doesn’t leave the viewer any time to ponder the script’s absurdities or inconsistencies. 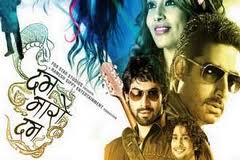 When local student Lorry (Babbar) receives admission into a U.S. college but without financial aid, the Goan drug cartel sees an opportunity for a mule. After much persuasion Lorry consents, and lands at the international airport with his cocaine-laden bags. The next sequence introduces us to the “heroes” of the movie, and is worth the price of admission. Each character is battling demons, from newly- reformed ACP Vishnu Kamath (Bachchan) to the susegaad Joki (Daggubati), the networked but powerless singer.

Lorry becomes a hapless lever used by Kamath to shake up the Goan mafia in search of the elusive Michael Barbossa, a shadowy entity that appears to exercise control over the various international drug factions that have divided up Goa.

Crackling dialogue and crisp direction move the story along. The one-liners and cheeky references to Amitabh films (Mere paas maal hai!) elevate the film from a by-the-numbers underworld movie and provide comic relief to the grim proceedings. Sippy captures the sex, drugs, and rock and roll atmosphere of Goa perfectly without forcing it on the viewer; the playground of the world is beautiful, sinister, and charming at once. One scene, shot in only the ambient light of a starry night, is a testament to the world class cinematography of modern Bollywood.

Unfortunately, the ensemble cast is picked with an eye to mainstream audiences, exposing the shallowness of Bollywood talent. But Babbar’s turn as the beleaguered Lorry is memorable; he manages to erase the memory of the humble Munna from Dhobi Ghat and the insouciant Amit from Jaane Tu with a sterling performance as the misguided teenager. Daggubati is eye candy and has the most sympathetic role of the lot; the actor from the South makes an impressive debut. Bachchan is competent, but he seems to playing variations of the same role –the suave crime-stopper- in every movie. If he has any plans of salvaging his career, he needs to step away from Bollywood and search out the offbeat indie directors who can give him a new lease on life.

As a gangster flick, comparisons to Vishal Bharadwaj’s Kaminey or Ram Gopal Verma’s Company are inevitable but unfair. DMD has a visual and story-telling style of its own, and makes no bones about being nothing more than a commercial, paisa vasool, time-pass entertainer. It lacks the mad genius of Bharadwaj or the gritty realism of Verma, but it is an unpretentious, highly entertaining piece of work on its own.

As with Kaminey, the director is unable to resist providing a quasi-happy ending for his characters-are Indian audiences not ready for the messy realities of life?