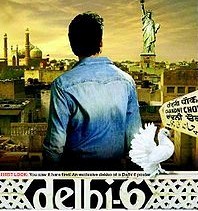 With Rakeysh Omprakash Mehra, one is never quite sure what one is going to get. The former ad maker directed the successful and critically acclaimed Rang De Basanti in 2006 but it took a good five years before that for us to forget the wildly experimental Aks, a nightmarish movie featuring long Hamlet-style soliloquies and body-swapping killers.

Delhi 6 falls somewhere between the two. It has somewhat of an activist message like RDB and uses totems and symbols like Aks. The storyline is thin. NRI Roshan( Abhishek Bachchan) returns with his grandmother to the crowded Delhi district where generations of his family lived, wall-to-wall( literally) with many old friends and neighbors. He gets to experience the chaotic, claustrophobic and closely-knit community his parents left behind when they moved to America and to decide whether he belongs there.

That is about it. The movie is a series of snapshots of life in Delhi( Zip Code 6); the interfering neighbors, the family squabbles, the communal relationships that, despite the avowals of harmony can change from love to hate in a flash.

The film is heavy with symbolism; Roshan is the new India – western-oriented but with a yearning to connect with his roots. His love interest Bittu(played by a charming Sonam Kapoor) is the middle class girl struggling to break free of the shackles of her culture and environment. That she attempts to do so by auditioning for a reality show is a piece of delicious irony. (Television is considered to be one of the driving forces in creating the appetite for material goods that could propel the apathetic suburban India into the new century.) Grandmother Annapurna( Waheeda Rehman) represents the conservative India – affectionate and loving but also religious and superstitious, she is content with letting the status quo be, whether it is treatment of untouchables or communal tensions. “Stay out of it” is her guiding principle.

Then there is the “Black Monkey”. It is a mythical figure that is referred to from the first scene of the movie yet no one ever sees it. The monkey functions as a potent symbol of all the amorphous fears that divide and separate Indians from each other, a mirror to the evil that lies in all of us, a point the filmmaker drives home without subtlety in the form of a madman who carries around – you guessed it – a mirror. The monkey, a source for many comedic moments, is also the catalyst for the shocking denouement of the film. (SPOILER ALERT: Squeamish viewers can rest assured that all is well at the end.)

Delhi 6 is an experimental film and I applaud the fact that movies like that, with no coherent narrative but lots of style can find financing in these times. Perhaps the producers were expecting another Rang De. If so, they (and you) will be disappointed. It is not a film made for box-office success. Rather it is a meandering, nostalgic trip down memory lane, a director’s indulgence that really doesn’t care if you like it or not. The only concession to the audience is the presence the two leads and an ensemble of excellent actors, many of whom have just one or two lines.

Abhishek Bachchan is at his relaxed best. His chemistry with Sonam is great though the relationship is not fully developed in the movie. Vijay Raaz as the abusive local law enforcement is pitch-perfect. Other art-house stalwarts like K.K.Raina and Atul Kulkarni give the movie a polished professional touch.

Delhi 6 is a very well-produced, well-directed and well-acted movie. But those expecting a conventional film with a beginning, middle and end can skip it. It is meant for audiences with the patience and curiosity to explore a different kind of artistic vision.