Given the profusion of dance forms that thrive in India, it would not be a stretch to say that Indians are born with a sense of rhythm. No one exemplifies the love affair that we have with movement better than Selvi Pragasam, the founder of the Indian Fusion Dance Academy (IFDA) in San Jose.

A graduate of the Master of Fine Arts program in India, Selvi traveled abroad extensively as a professional dancer, even managing to perform in front of the Pope. Like many Indian American immigrants, Selvi put up her dancing shoes when she came to the US pursuing a career in technology.

Life took a serious turn when her newborn son Aidan was diagnosed with a rare illness called Propionic Acidemia. She devoted herself to caring for his special needs for several years. Eventually she joined Jeena, the support organization for parents of kids with special needs and started choreographing dances for them. Her  involvement with community groups like the Bay Area Telegu and Kannada Associations also kept her busy organizing and choreographing dances for their functions.

Friends suggested she set up a dance school and the Indian Fusion Dance Academy was formed. She started it as an evening and weekend program in the beginning, but it proved to be so successful that the Academy became a full time enterprise within 3 months.

Today Selvi runs the IFDA with the help of a dancer friend who also has a special needs child. The Academy has about 150 students, a number that Selvi wants to limit herself to be able to do justice to her pupils.

The school prides itself on the creativity of its offerings. “Bharatanatyam is a lovely art form, but it does have its fixed set of rules,” says Selvi, “and artists like Shobana who have tried to experiment with it have been heavily criticized. I would rather keep its purity and experiment outside the format.” She and her partner Lavanya Gopal experiment with incorporating belly dance, jazz, salsa and many other forms of dance into their performances.

“I want to have the full freedom to do what I want to do,” adds Selvi. “We have classical classes as well as classes that offer half an hour of Bollywood or folk. Our combo classes are never boring. We have semi-classical pieces which incorporate western influences like ballet, jazz and salsa. My advanced class is doing a bit of Mediterranean dance. Sometimes we structure our dance around a theme.”  The academy offers its own certification to the dancers apart from the formal arangetrams that the Bharatanatyam dancers train for. 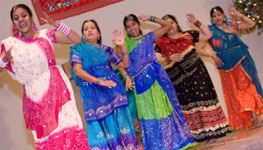 IFDA is not limited to teaching Bharatanatyam and fusion dance classes. Because of her background with special needs, Selvi puts up shows as fundraisers for Jeena and the Propionic Acidemia foundation, among other worthy causes. The academy also makes it possible for  middle and high-school students volunteer at her special needs dance classes as part of their community service requirements through Selvi’s connection with Jeena.

The Indian Fusion Dance Academy just began its spring session a few days ago and registrations are mostly closed. “We have just found a fantastic bhangra instructor,” says Selvi. That is a new class being offered by the school that is still open. “I want to add yoga classes and develop this into a full fledged fine arts mecca for Indian Americans.” IFDA also offers Carnatic music classes.

IFDA students will perform at the upcoming Jeena Yahaan. Jhalak Dreams, the academy’s annual fundraiser is scheduled for June 6. 2009.