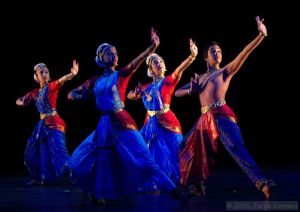 A decent turnout on a Friday evening-Sep 11, 2009 at Cubberly Auditorium, Palo Alto- was ample proof that Mythili Prakash’s debut of the Drishya Kaavyam production was eagerly awaited by the serious rasikas of Bay Area, CA. It was indeed a treat to the eyes; almost every piece had the dancers in different costumes, and every group piece was a visual delight. The pace throughout was…well, Mythili-esque- fast and staccato, a shot of mental caffeine. The lighting and orchestra deserve special mention, as both were outstanding.

The beginning of “Aum, The Sound of Silence” was spellbinding. Shiva (Mythili) was silhouetted on a pedestal with the dancers assuming various static poses below. As the music chimed in, some danced while others spun, some others paused while the rest performed frantic nritta. Out of this clamor arises Shiva, with his damaru punctuating the chaos. However, the damaru sounds were not heard above the orchestra; this could’ve easily been achieved by the percussionist. Also, the narration stated that the piece was about the sound of silence, yet, that was the only thing missing. What was sorely missed was the Aum- the effect of pulsating silent vibration. Were it not for this conflict between title and description, the first item would be faultless.

“Surya Kanti Nalini”, the blossoming lotus was well conceptualized. The group seemed to hold their own without Mythili. Some of the formations were refreshing. The flower was multi-layered, and the most lotus-like of all stage depictions. The blossoming was explored individually, and in teams; keeping time with a fast and then faster beat.

“Prithika” deserves a thorough critique, because it shows promise of being a great piece. The idea of showcasing paths to Divine Love always holds appeal. Choreographed as a solo, Mythili first portrayed the jeevatma transforming to paramatma: Radha-Krishna’s sensual devotion to one another, via the ashtapadi Kuru Yadunandana. Mythili’s portrayal was more youthful than the usual quiet presentation of shringara, but held true to the spirit of familiarity between the lovers. One could feel Krishna’s presence by how Mythili showed herself being lifted by him.

The choice of the Taj Mahal as the next showcase piece was an indicator of the originality that drives Mythili to excellence. Shah Jahan’s pining for Mumtaz Mahal was well depicted, the highpoint being him resting his head on her tomb. The piece was set to Jagjit Singh’s Hoton Se Chulo Tum, which, while a match in its mood was not a match in the lyrics- Shah Jahan’s was a pining for the dead lover, not the elusive lover (the song talks about “ban jao meet mere”/ be my lover). A humming of the soulful melody might have been more appropriate here; also because a comparison to Jagjit Singh’s stirring original is inevitable. Showing Mumtaz Mahal reaching down from her spiritual self was a touching tribute to Divine love. The jarring note though was that Shah Jahan reaches for her hand and places it on his head, a distinctly South-Indian gesture. It would be more in keeping with the Islamic practice to place it on his cheek or even touch his lips to it. Mythili’s interjection of the lines in between the pieces “…take away everything that takes me away from you…”, while innovative, because it was in English, seemed repetitive. She could’ve used the same words but done it BharataNatyam sanchari style- different gestures to depict the same meaning. The use of the dupatta was excellent symbolism.

The third snippet was the fusion of male and female energies in Ardhanari. Taken in isolation, it was great. It was a visual feast to see the superb choreography giving the illusion of two divinities fusing and dancing in tandem. However, it took a while to get used to the fast pace after the gentle touch of the preceding song. She should have this be a stand-alone piece and look for a different third love-couple or another Ardhanari song to complete the trio in her Prithika.

“Dashavataram”, right after the Intermission, was steroid-fast. It was superbly choreographed and presented; highlights being the depiction of Rama’s life in couplets; Parashurama’s ending; and Kalki avataram. “Current” was a marvel to watch, and with all of Mythili’s pieces, one needed to catch one’s breath at the end. It could have been christened better, though…even Currents would be a better title. Nobody said “SwaraLahiri” was going to be just the orchestra, one kept waiting for the dance to begin. Since it was designed as an audio piece, they should’ve identified the raga first; the presentation was good but not superlative. A long strip of cloth could be used here, to show the movement of currents, and depict petals/ lake-surfaces as the wind presses down on them- to make for more visual allure.

The thunder from “Khuda Ki Tasveer” was stolen by other dancers dancing to other Sufi songs in the years past. The notable difference here was the singing- Flautist Mahesh Swamy somehow coaxed a Nusrat sound from within himself. The qawaali-esque clapping and vocal support was impressive. Mythili could’ve used more dancers here, especially at the end, it would’ve been diverting to watch several dancers doing the Sufi trance-twirling.

All in all, Drishya Kaavyam was a noteworthy presentation, Mythili has a sense for drama. With some tightening of the storyboards and more props to heighten the visual poetry already accentuated by great lighting effects (if it is drishya kaavyam, then more attention must be paid to the drishya elements), it will blossom into a memorable production.

Lehkikaa is a Bay Area dance and drama critic.