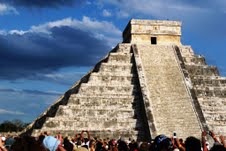 “Amigos, it’s not chicken pizza.” That was the first thing our guide Vincent told us when we reached the ancient Mayan town of Chichen Itza. Chichen Itza is about 30 minutes from Valladolid in the state of Yucatan and just a couple of hours drive from the tourist hotspots of Cancun and Playa del Carmen. Valladolid was one of the first towns established by the “Conquistadores” and you can tell that they used a lot of stone from Mayan structures to construct their buildings and churches.

Chichen Itza is a testament to the scientifically advanced Mayan civilization. Mayan astronomy was very well advanced and they knew about the revolution of earth around the sun and did very accurate calculations about it. The pyramid is a living example of that fountain of knowledge. As can be seen from the picture, each side has 91 steps, which makes it 364 steps for all the four sides. There is an additional step on the north side corresponding to 365 (364 + 1) days of the year. Each side has 9 levels and the steps split each side into two parts giving 18 separate levels on each side. The Mayan calendar had 19 months, with 18 months of 20 days each and a 19th month of 5 days. The Mayan calendar is believed to have been created sometime between 16th and 6th century BC, compared to the Julian calendar which was introduced in 46 BC. The Mayan calendar is considered to be more accurate than the Gregorian or Julian calendars.

The central attraction of Chichen Itza is the massive pyramid which forms the center of a large city occupied by the upper classes that covered almost 25 square kilometers. The lower class lived outside the main town.
We were lucky to be at Chichen Itza on the day of the Spring Equinox. On the equinoxes, a shadow representing a serpent comes down the pyramid and meets the snake statue at the base of the north side of the pyramid. The serpent represents the Mayan feathered serpent deity of Kukulkan. It is amazing to know that this structure was built around 600 AD with such precise astronomical knowledge.

Towards the west of the pyramid is the ball court in the shape of an “I”. The Mayans believed that humans went to heaven in their after-life and so it was an honor to get sacrificed. Typically the captain of the ball team (either winning or losing team) was sacrificed at the end of the ball game. The way the stones have been laid on the walls of the ball court also allowed for excellent acoustics on and around the court. This was in sharp contrast to the announcements being made at Cancun airport.

Another interesting feature of the Yucatan peninsula of Mexico is its geology. The ground of the Yucatan peninsula is like cheese. There are a lot of natural holes (called cenotes) in the ground and a lot of them are filled with fresh natural ground water. We had the chance to visit a very popular cenote in the town of Ik-kil, which is very close to the ruins of Chichen Itza and the town of Valladolid. You have to go down winding stairs to the get to the water level. A platform has been created for people to jump into the cenote and then swim around. Going up the platform (about 20 feet from the water level) and jumping into the water after so many years from such a height, caused me to skip a beat.

A lot of people start and end their tour of the Yucatan peninsula in Cancun and Playa del Carmen, but there are a lot of other side tours like Chichen Itza, Tulum, Mayapan, Uxmal etc which are also very interesting and are highly recommended. I would highly encourage everyone to look beyond the beaches to soak up the local culture and get acquainted to the rich history of the place as well.

Rhishi Pethe works in supply chain management consulting and is currently pursuing a part time MBA at the University of Chicago. His interests outside of work are spending time with his wife, travel, reading, economics, jazz, good food and blogging.