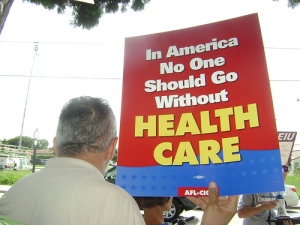 Why is this important to you? See this post for how the bill affects you.

Why is this important for the nation? At long last, a developed country has agreed that access to affordable health care is a right of its citizens, not a privilege. The bill is not perfect, in fact, it is closer to the Republican vision of 1993 than feels comfortable. But it is a start.

The end feels anticlimactic, given the overwrought rhetoric and media-induced drama. But there is no doubt that this is a momentous event. And given how the media played it to be the defining moment of Barack Obama’s presidency, it has validated the President’s last minute push and given him the victory he needs to push through many other legislations in the pipeline, like education and immigration reform.

To all of you who bothered to pick up the phone and speak with your representative or Senator, thanks! Just like the historic election of Barack Obama, this was the success of the collective efforts of tens of thousands of humble individuals, who pressured and cajoled and threatened their congressmen and their senators to do the right thing. I was one of those, I am proud to say, and this underscores the importance of each and every voice and vote.

Let’s celebrate tonight. And get back to work on making this bill better tomorrow.