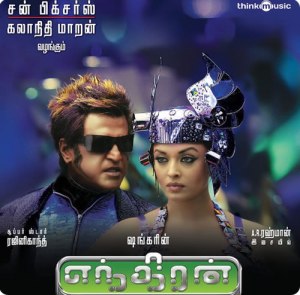 As writer Grady Hendrix puts it in this awesome profile, superstar Rajnikanth is a force of nature. Despite never having seen a previous Tamil movie of the man, I put aside precious time this weekend to go see Enthiran in the theater, bravely casting aside the protection of my trusty remote control, knowing I would be stuck in the theater for three hours, unable to fast-forward unwanted scenes and songs.

The movie, which has created hysteria in the otherwise sanguine Indian diaspora, lives up to its hype at first. As we watch Dr. Vasigaran build a robot (technically an android) in his image, the special effects measure up to international standards. Even Rajni’s makeup is marvelous, making the 60-year-old grandfather’s romance with the lovely Ms. Bachchan way more credible and way less creepy than it should have been.

It’s easy to see why fans are crazy about this humble bus conductor from Bangalore. There’s a cheekiness in Rajni’s portrayal of both Vasi and the robot Chitti that suggests the actor is in on the joke—it’s all a big spectacle for the audience’s benefit and not one bit’s meant to be taken seriously. (Memorable lyrics to Rahman’s peppy numbers include comparing the heroine to honey-soaked wasabi, for the express purpose of rhyming with gulabi (rose)).

As Vasi delivers his quips with panache, and Chitti the robot breaks into bharatanatyam moves, the audience claps and howls in appreciation. Even the plot moves along at a fairly crisp clip, as the good doctor enhances his robot to make it more and more humanoid. There’s plenty of opportunity for situational comedy arising from the robot’s literal interpretation of language, and there are a couple of bumbling sidekicks thrown in for good measure. The yawning cultural gap between East and West is never more apparent as when it is revealed that the robot is built for the express purpose of being used in the military, usually the point in Hollywood movies where the hero gasps and resolves to liberate the lovable machine from its nefarious destiny. Instead, the villain in Enthiran has a far simpler, ethically unquestionable motive for stealing the robot; he just wants to sell it for megabucks.

At intermission, an hour and a half later, Chitti has been programmed to have feelings, and the plot has been set up for an exploration of what it means to be human, previously tackled in movies like the darkly thrilling Blade Runner and the sentimental Bicentennial Man.

Except for the unfortunate circumstance that this is a Tamil movie with an apparently bottomless budget.

Then there are the dozen or so song and dance sequences, filmed in baffling international locales, with Bachchan gamely peacocked up in bizarre outfits that would have made Telegu heroines from the 80s proud. My thumb furiously savages the cell phone in my hand, vainly searching for the fast forward button.

Only the 20 bucks I have paid for my ticket prevents me from leaving the theater (I believe ticket prices were as high as 30 dollars in some places). The ending, which arrives after about the 500th time I check my watch, is amazingly tame, glossing over the fact that the body count numbers in the tsunamis, and that the robot has destroyed property and technology worth the equivalent of current Indian GDP.

In the end, Enthiran is just a special effects indulgence, sprinkled with enough genuine Rajni to keep the fans coming. It is easy to see why the actor is so beloved; even in the stupidest of scenes he plays it straight and true, with a sincerity and humility that is at odds with his fame.  Despite the challenging characterization and the double roles, the movie uses him and lets him down. Watch the entire movie only if you are a hardcore Rajni fan. If not, leave during intermission, content to have seen an ageing superstar still bring his A game.

Kid advisory: Not suitable for kids under 10.

1 thought on “Do Androids Dream of Item Numbers?”