The bad news about GoW is that it doesn’t tread on any new stuff. The good news is that where it does tread, it does so with a sure and deft touch, showcasing director Anurag Kashyap’s now-undeniable talent.

Movies about gangland empires and their bloody turf wars and successions are pretty common ( and, in my opinion, easy to make). Pick alm 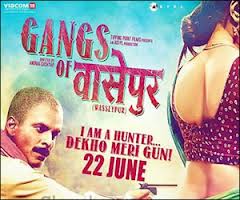 ost any of Ram Gopal Varma’s oeuvre and you’ll see what I mean. The difference here is that instead of setting the confrontations in Mumbai’s dank and fecund underground, Kashyap takes on the coal belt towns of Dhanbad and Wasseypur and the gory butchering industry to craft a multi-genrational saga that has more than a passing resemblance to the Godfather series in its delineation of characters and their relationships.

Family rivalries begin in 1940s India between the Qureshis and the Khans and continue unabated as the momentous events of Indian independence simply translate to a changing of the reins of power without any impact of the lives or fortunes of the poor. British oppression gives way to exploitation by the corrupt politicos of the district, as the protagonists quickly figure out new alliances.

GoW is told from the point of view of the Khans, with a bulk of this first movie focusing on Sardar Khan, the second generation of the Khan family as he hard-scrabbles his way to establish himself as the local goonda. As his life story is revealed, we see the complex dynamics in the power play between the two families, and can see the beginnings of the rivalries that will permeate the next generation.

If the plot sounds familiar, it is, and this tends to make the movie a tad predictable. But it is scripted, directed, and acted amazingly well. If mainstream movies aimed for even 50% of the talent that is on display here, the Indian film industry would be ready to take its place in the ranks of global cinema.

Manoj Bajpai as Sardar Khan is as good as ever, and deals with the complex character with nuance. The script and his fine acting are able to give this cold-hearted killer a sympathetic touch, which is quite a feat considering we see him hacking down rivals in the most gory ways possible.

The supporting cast is equally good, and using lesser-known actors really pays off, as they completely inhabit their characters. The women, as often happens in these gangster movies, are the wives, mistresses and victims, but the terrific writing is able to flesh out each character in the limited time she is given. Kudos to Kashyap for making the fearsome Sardar a hen-peckedcoard at home; this makes for the few laugh-out loud moments in this grim and gruesome movie. Richa Chaddha as Nagma, Sardar’s wife, is pitch perfect, and Reema Sen as his mistress is great too.

As I said before, I happen to think that gangland movies are relatively easy to make because there is so much drama to be exploited. RGV’s success with Satya, Sarkar, and Company, and his appalling failure with other genres (except for Rangeela) sort of illustrates my point. But Kashyap has already proven his mettle with such diverse movies as Dev D, a contemporary remake of Devdas, and That Girl With Yellow Boots, where wife Kalki Koechlin play the eponymous role of an expat masseuse looking for her father. Gangs of Wasseypur feels like an experiment in this particular genre,though a wildly successful one. Here’s hoping that after this saga is completed with GoW2 we’ll see another quirky movie in a different genre from this terrific movie maker.

Oh, the music? I didn’t particularly care for it, but it seemed to appeal to the guys I know a lot. Maybe a gender thing.:)

Kid Advisory: NOT FOR KIDS OF ANY AGE.