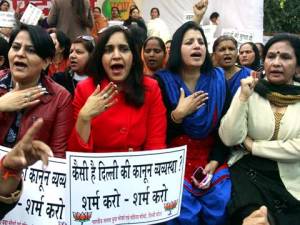 You may not know what happened in Delhi two weeks ago, most likely because we were mourning the loss of all the innocent children in Connecticut, who were murdered a day earlier. But something horrible happened. And no loss, or tragedy should be pinned or measured against another, but I feel like what happened on December 16, 2012 in New Delhi is something that every woman, every man, and especially every American of Indian heritage needs to know about.

I am too emotional to put into words the horrific events that led to the brutal rape and subsequent death of a young woman, but I’d like to recommend a blog article posted by a former colleague of mine.

The Mayans predicted that the world would end, and in my view, they were right. Humanity has died, and has been laid to rest.  I think, when something like this happens, when something like Sandy Hook happens, you start to think about things, you start to use those two words, ‘what if.’ What if, it was my child, who I sent to school that day, but will never get to send to school again? What if, I was that girl, who got onto a bus, after just watching a movie with a friend, but would never ever be able to get onto another bus again?

I think more than anything I am disgusted that this is something that has happened, in 2012. In a city that claims to be metropolitan, in a country that wants to move away from being “third world.” Guess what, you just moved all the way back, and then some.

I lived in Delhi alone, for a year, and I can’t help but think what if. That girl, she did what I would have done, she got on with a male friend, and assumed a natural level of comfort, which 6 barbarians have just stolen away from every single young, working woman in the capital. What if it had been me?

Following the girl’s death, reports came out that she and her friend were actually waiting for an auto before they got onto the bus. I can’t tell you how many times I had to wait and wait and wait for an auto, but I never got onto a bus, because I never knew how they worked, and I would just start walking. I’d walk on main roads, and again assume a natural level of safety thinking “If I stay on the main roads I’ll be fine.” I guess I must have been really, really lucky.

What’s worse is some of the comments we’re hearing from officials. “Ladies shouldn’t be on a bus at that hour.” Really? Well, why do you have movies that start at 10pm? Oh wait, I’m sorry, that’s only something for men to do? “Ladies shouldn’t dress inappropriately with short skirts and tank tops.” Um. I don’t even know what to say to that because that’s the most illogical reasoning I’ve ever heard in my entire life. So what you’re saying is that I’m inviting someone to rape me by wearing a skirt? Sorry, but, no.

I think it’s beyond ridiculous that we’re still living in a society that places women underneath men.  I think it’s beyond ridiculous that the officials of the country are coming up with reasons that justify the accused’s actions. Basically what you’re saying is that it’s a crime to be a woman at all, and we should wear baggy trash bags so in order to not encourage men’s primal instincts. Not that it’s going to stop them anyway.

Being under the influence of alcohol makes you do stupid things, this we know. We all say things, text things, FaceBook things that we end up regretting. But this, this is inexcusable; I don’t know how much you’d have to drink to do these unexplainable things.

Luckily the 6 accused are in police custody. Though I’m not entirely sure how effective that is, given that the political situation in “The World’s largest Democracy” isn’t what one would call organized or fair. I’m not sure what fate awaits them, I’m not sure what their mothers, sisters, or wives must think of them, though I do know what the world thinks of them.

I don’t know what will happen; I don’t know if things will change, though I’m sadly doubtful that anything will come of this. The thing is we still live in a world where these unspeakable things happen on a daily basis, but we just don’t hear about them. It’s true that these unspeakable events don’t happen only in India, but when it happens so close to home, we feel it so much more. The reason we don’t hear more about them is because we, as a society, shove them under the carpet. Because, as women, we’re ashamed of what the world will think of us, what our families will have to deal with. What we should be more concerned about is highlighting that we didn’t do anything wrong, WE were wronged.

We do not know her name, but one thing is for sure, we know what happened. Wherever she is, she should know that we all heard her story. We know that when she got to the hospital she told her mother and the doctors that she wanted to live. We would have wanted here to know that what happened wasn’t fair.

Her legacy, horrifying and painful as its origins may have been, is that we are all talking about the vile act that is just an extension of many smaller indignities that Indian women face all the time. I hope she knows that, and is comforted.

Isheeta is one of the many first-generation American born Indians that relocated to India for college. She studied in Delhi, and after finishing up relocated to Bangalore, to work for Reuters as a journalist. After a few years of living and working in India she recently relocated back to the Bay Area, where she was born and raised. She shares with us her unique perspective on her experience of living in India, and dealing with various cultural issues. She currently works at a start-up in the Silicon Valley.