The producer at the radio station where I host a kid’s quiz show was unusually complimentary. “Your show is so interesting and fun..it deserves its popularity,” he gushed while I blushed. As I arranged my quiz paraphernalia in the small booth where we work, he went on. “What I don’t get is the appeal of the panditjis and psychics,” he grumbled. As the person fielding the incoming calls, he had had his fill of mothers and fathers and uncles and grandpas who begged for divine help from these distinctly mortal messengers, some of whom he had known when they were neophytes looking for an angle to work.

Tune in any weekday at the station and its easy to understand his frustration. “Panditji,” comes the plaintive cry through the air, “my daughter is just not getting a suitable boy. Help!” After a twenty-second exchange of a few birthplace and time details, the eminent host has a solution. “Tell her to wear an emerald of nine carats, and donate a kilo of rice on a Tuesday.” Then comes the kicker. “If you have any further questions, you can contact me on the private line at….”

The psychics are even more awe-inspiring. They need only your name to tell you your past, present, and future. And because the volume of calls has not decreased an iota since they set up their shingle, either they have an in into the workings of the universe or, as famous showman P.T. Barnum was once criticized, “There’s a sucker born every minute.”

“Why is belief in psychics or on-air astrologers so mystifying when people believe in God?” I asked my producer back in the studio. He looked miffed, so I hurriedly changed topics. “Desperation?” I ventured as a guess to the callers’ motivations. “Or the desire for a quick, free, fix?” After all, the man who needs a job has to put in the hard work of perhaps getting trained in a new field, updating his resume, and networking intensively to get the job of his dreams. How much easier it would be if those problems went away with a ring or a ritual.

But faith is not so simple or shallow. In all probability the job-seeker is wearing his ring and doing his rituals while networking and taking evening classes. The contestant who wears his tilak to my quiz show and loses is not going to stop doing so because his faith let him down, he might just prepare better next time. The parents of a child prematurely lost to cancer or war will continue to conduct services in church and pray for understanding and reunion in the afterlife.

And that is the true mystery of faith, how it survives and endures against all 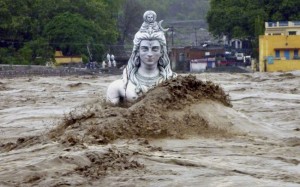 odds. Watching the carnage wrought by the flash floods and landslides in Uttarakhand brings this mystery into sharp focus. Thousands of pilgrims have been obliterated by the viscous mud, but the “miracle” of the preservation of the holy shrines is proof to them that God is omnipotent. Geeta Padmanabhan, columnist for The Hindu newspaper, writes, “In about two/three years when Kedarnath opens, the pilgrims will be back – the old, the young, women with infants in arms, children, the infirm using walkers. ‘Is it done in love, is it done in fear?’ asked  Mark Twain about this extra-ordinary journey through dangerous terrain.”

Is it love or is it fear? What makes us continue to venerate a God who, at least to the objective viewpoint, seems to have been extremely selfish to have protected his territory while nature wreaked havoc all around? How does the quarterback or basketball star reconcile God’s hand in his victory with the same God who leaves thousands starving a continent away? Is our idea of God that of a fairy godfather or a personal guardian who has to be propitiated, pacified, and praised to deliver magic powers on our behalf? If God is love, as most religions claim, boy he has a strange way of showing it.

The randomness of life, the unfairness of fate, and the plight of the suffering faithful have long made me a skeptic, but if I am to be truthful, I envy those whose faith is strong. It is not an emotion that is swayed by logic, evidence, or personal experience. It may wobble, but it never topples over. And when it is not clouded by intolerance and bigotry, it acts as an anchor to chaotic lives and arbitrary fates in the best possible way. It fulfills the human desire for fairness, a need to believe that a life lived in piety and morality will reap its just rewards. And if events don’t bear that belief out, one can always console oneself with the promise of a heaven or a better reincarnation. Its almost like a child’s belief in Santa Claus, except there is no North Pole to go to and disprove the existence of elves.

Still, the line between stupidity and wisdom is very thin, and I am not qualified to judge. For the majority of the human race, faith seems to be a primeval urge that doesn’t need godmen or psychics to exist; they are just remoras who latch on to this whale. So if chanting prayers or wearing corals or trekking to the Himalayas is what someone needs to make sense of the irrationality of their existence, I cannot criticize; I can only wish I could feel that way.